First residents of New York State were, of course, "Native Americans". But there is no clear data of "American Indians" population, let alone New York State. Historians estimate Native population from 1.8 million to 18 millions in North America, just North of modern day Mexico. Nevertheless Native Americans, Africans, Europeans and immigrants from all around the world have contributed to make New York into its modern day culture with multi-ethnic roots. 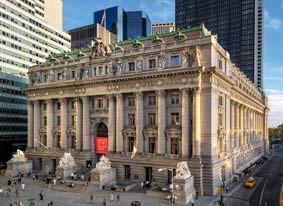 National Museum of the American Indian— New York City
The National Museum of the American Indian, part of the Smithsonian, is located within the historic Alexander Hamilton U.S. Custom House in lower Manhattan and explores the diversity of the Native people of the Americas with programs like music, dance, films and symposia, as well as permanent and temporary exhibitions that draw upon 700 artifacts and works of art, including headdresses, instruments, baskets and clothing. https://paththroughhistory.iloveny.com